A faction of engineeringshock.com
Paintball Props

This prop is extremely easy to use, and simple to mount.  This 3-digit electronic "safe" prop was designed to reveal a secret compartment, or open a secret door by implementing the included electromagnetic lock. It comes with three mountable variable resistors that are used to control each of the three digits.  When the player has entered in a code, they press the mountable green LED button to select it.  If the code is incorrect, the three digits display "Err" (ERROR).  If the code is correct, the electromagnetic lock is turned off, and the three displays show "POS" (POSITIVE).  When the green LED button is pressed once more, the lock engages, and the system goes back into code entry mode.

The Default Code & The Programmable Code:
The default code is "927", but we can change that code to whatever you'd like at no additional charge.  There is also a mode that allows for you to program in your own code on power up.  During power up, if you wish to use the default code, all you need to do is wait for the displays to stop scrolling.  If during power up you wish to program in your own code that will stay programmed into software until power is removed, then you simply press and hold the green LED button until the displays stop scrolling.  Once the displays stop scrolling, all three displays will turn off.  At this point, take your finger off of the LED button, and the displays will light up.  Use the variable resistors to set your own game code, and then press the LED button once more.  The displays will then scroll again, which is an indicator that your code has been programmed.  This code will be the deactivation code until you remove power from the system.

Can I Control Something Other Than The Included Electromagnetic Lock???
You bet you can!  The explanation for this is detailed in the above video, which we hope that you've already watched in full.  You have the option of using the included electromagnetic lock, OR you can control other AC or DC devices by implementing the relay output terminal block.

Using the relay output terminal block:  If you do not wish to use the electromagnetic lock, and would rather control something else, then you ABSOLUTELY need to remove the two "EN" jumpers.  This is talked about in the above video.  Once you've done that, you can use the relay as a simple ON/OFF switch.  The relay terminal has three terminals labelled:
NC: Normally Closed
CO: Common
NO: Normally Open
When the relay is off, the CO terminal is connected to the NC terminal.  When the relay turns on (After a correct combination has been entered), the CO terminal disconnects from the NC terminal, and connects to the NO terminal.  When the relay turns off again, the CO terminal disconnects from the NO terminal, and reconnects back to the NC terminal.  It is a simple ON /OFF switch.  If you need more information, or require help or assistance with this, drop us a line through our contact page.  We'll happily be of service!

If you have any questions at all, please do not hesitate to send us a message through our contact page.  We will get back to you promptly with solid answers to your questions.  Thank you for taking an interest in our wares! 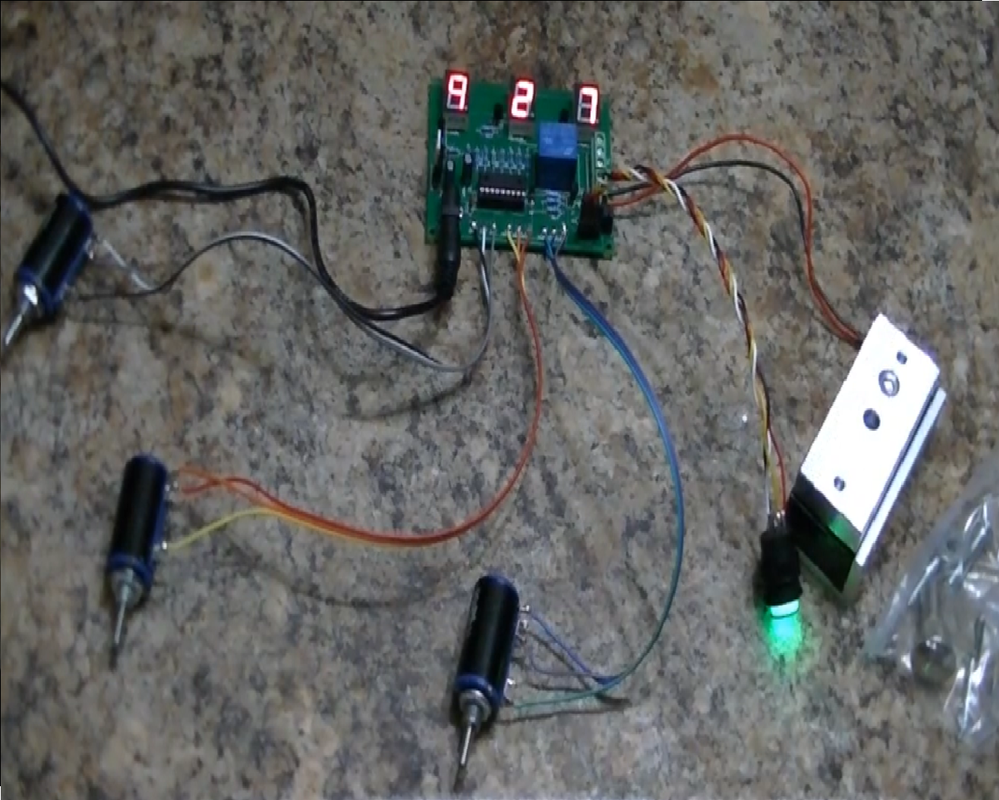 Please note: paintballprops.com products are designed and intended for recreational gameplay and training purposes ONLY. Any and all modifications or misuse of any of our products is in direct violation of our customer agreement and eliminates any and all liabilities of paintballprops.com and any affiliates. Please use and play responsibly!